Is a Brazilian martial art that combines elements of dance, acrobatics and music, and is sometimes referred to as a game. It was developed in Brazil mainly by West Africandescendants with native Brazilian influences, probably beginning in the 16th century. It is known for quick and complex moves, using mainly power, speed, and leverage for a wide variety of kicks, spins, and highly mobile techniques.

The most widely accepted origin of the word capoeira comes from the Tupi words ka’a (“jungle”) e pûer (“it was”), referring to the areas of low vegetation in the Brazilian interior where fugitive slaves would hide. Practitioners of the art are called capoeiristas.

On 26 November 2014 capoeira was granted a special protected status as “intangible cultural heritage” by UNESCO.

Capoeira’s history begins with the beginning of African slavery in Brazil. Since the 17th century, Portuguese colonists began exporting slaves to their colonies, coming mainly from West Africa. Brazil, with its vast territory, received most of the slaves, almost 40% of all slaves sent through the Atlantic Ocean.

The early history of capoeira is still controversial, especially the period between the 16th century and the beginning of the 19th century, since historical documents were very scarce in Brazil at that time. But oral tradition, language and evidence leaves little doubt about its Brazilian roots. Different masters tend to have their own specific views on the history of Capoeira. A vast majority of masters recognize the art form as purely Brazilian, while certain masters have been researching for over 40 years to try and find any Capoeira link in Africa. 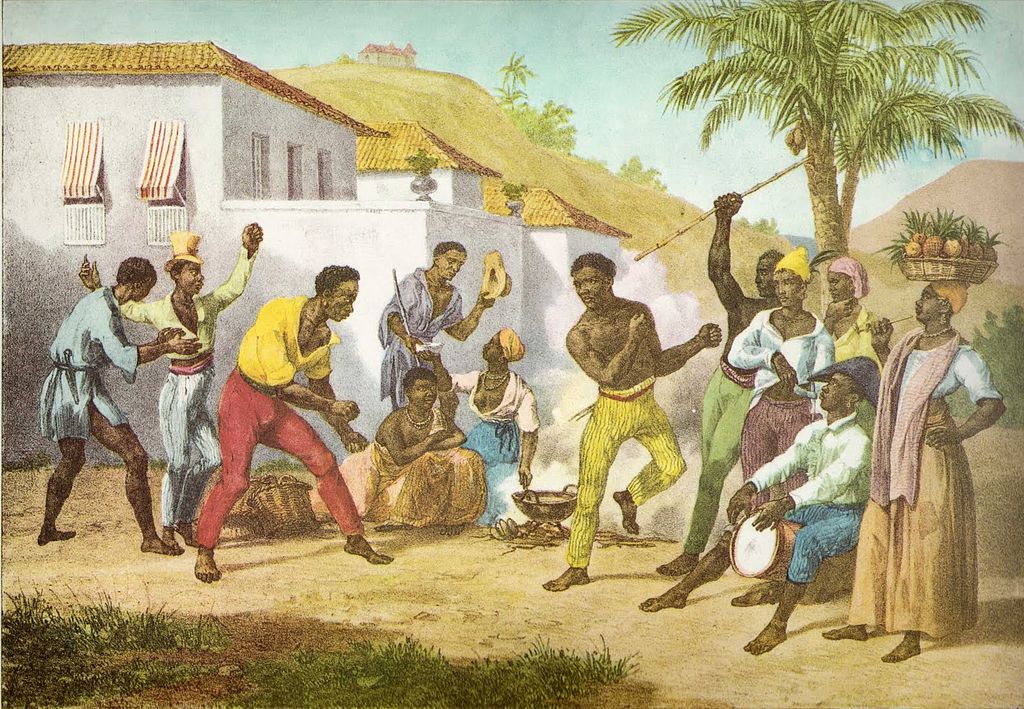 In the 16th century, Portugal had claimed one of the largest territories of the colonial empires, but lacked people to colonize it, especially workers. In the Brazilian colony, the Portuguese, like many European colonists, chose to use slavery to supply this shortage of workers.

In its first century, the main economic activity in the colony was the production and processing of sugar cane. Portuguese colonists created large sugarcane farms calledengenhos, which depended on the labor of slaves. Slaves, living in inhumane and humiliating conditions, were forced to work hard and often suffered physical punishment for small misbehaviors. Although slaves often outnumbered colonists, rebellions were rare due to lack of weapons, harsh colonial law, disagreement between slaves coming from different African cultures and lack of knowledge about the new land and its surroundings usually discouraged the idea of a rebellion.

In this environment, capoeira was born as a simple hope of survival. It was a tool with which an escaped slave, completely unequipped, could survive in the hostile, unknown land and face the hunt of the capitães-do-mato, the armed and mounted colonial agents who were charged with finding and capturing escapees. 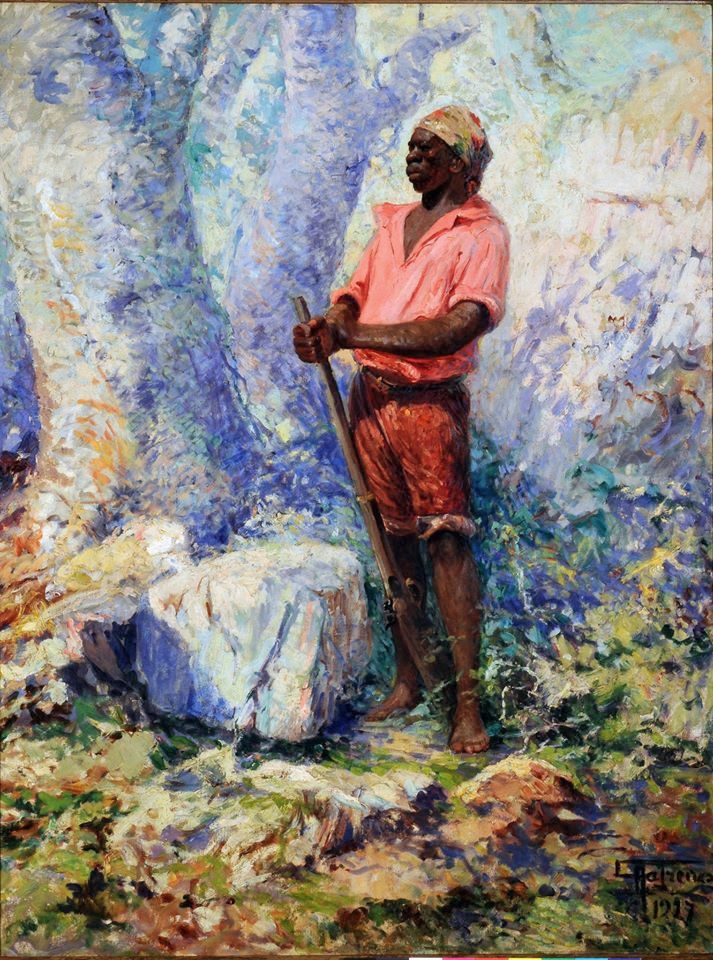 Soon several groups of escaping slaves would gather and establish quilombos, primitive settlements in far and hard to reach places. Some quilombos would soon increase in size, attracting more fugitive slaves, Brazilian natives and even Europeans escaping the law or Christian extremism. Some quilombos would grow to an enormous size, becoming a real independent multi-ethnic state.

Everyday life in a quilombo offered freedom and the opportunity to revive traditional cultures away from colonial oppression. In this kind of multi-ethnic community, constantly threatened by Portuguese colonial troops, capoeira evolved from a survival tool to a martial art focused on war.

The biggest quilombo, the Quilombo dos Palmares, consisted of many villages which lasted more than a century, resisting at least 24 small attacks and 18 colonial invasions. Portuguese soldiers sometimes said that it took more than one dragoon to capture a quilombo warrior, since they would defend themselves with a strangely moving fighting technique. The provincial governor declared “it is harder to defeat a quilombo than the Dutch invaders.”

End of slavery and prohibition of capoeira

By the end of the 19th century, slavery was doomed in the Brazilian Empire. Reasons included growing quilombo militias raids in plantations that still used slaves, the refusal of the Brazilian army to deal with escapees and the growth of Brazilian abolitionist movements. The Empire tried to soften the problems with laws to restrict slavery, but finally Brazil would recognize the end of the institution on May 13, 1888, with a law called Lei Áurea (Golden Law), sanctioned by imperial parliament and signed by Princess Isabel.

However, free former slaves now felt abandoned. Most had nowhere to live, no jobs and were despised by Brazilian society, which usually viewed them as lazy workers. Also, new immigration from Europe and Asia left most former slaves with no employment.

Soon capoeiristas started to use their skills in unconventional ways. Criminals and war lords used capoeiristas as body guards and hitmen. Groups of capoeiristas, known as maltas, raided Rio de Janeiro. In 1890, the recently proclaimed Brazilian Republic decreed the prohibition of capoeira in the whole country. Social conditions were chaotic in the Brazilian capital, and police reports identified capoeira as an advantage in fighting.

After the prohibition, any citizen caught practicing capoeira, in a fight or for any other reason, would be arrested, tortured and often mutilated by the police.[citation needed] Cultural practices, such as the roda de capoeira, were conducted in remote places with sentries to warn of approaching police.

By the 1920s, capoeira repression had declined. Mestre Bimba from Salvador, a strong fighter in both legal and illegal fights, met with his future student, Cisnando Lima. Both thought capoeira was losing its martial roots due to the use of its playful side to entertain tourists. Bimba began developing the first systematic training method for capoeira, and in 1932 founded the first capoeira school. Advised by Cisnando, Bimba called his style Luta Regional Baiana (“regional fight from Bahia”), because capoeira was still illegal in name.

In 1937, Bimba founded the school Centro de Cultura Física e Luta Regional, with permission from Salvador’s Secretary of Education (Secretaria da Educação, Saúde e Assistência de Salvador). His work was very well received, and he taught capoeira to the cultural elite of the city.By 1940, capoeira finally lost its criminal connotation and was legalized.

Bimba’s Regional style overshadowed traditional capoeiristas, who were still distrusted by society. This began to change in 1941 with the founding of Centro Esportivo de Capoeira Angola (CECA) by Vicente Ferreira Pastinha. Located in the Salvador neighborhood of Pelourinho, this school attracted many traditional capoeiristas. With CECA’s prominence, the traditional style came to be called Capoeira Angola. The name derived from brincar de angola (“playing Angola”), a term used in the 19th century in some places. But it was also adopted by other masters, including some who did not follow Pastinha’s style.

Capoeira nowadays is not only a martial art, but an active exporter of Brazilian culture all over the world. Since the 1970s, capoeira mestres began to emigrate and teach it in other countries. Present in many countries on every continent, every year capoeira attracts to Brazil thousands of foreign students and tourists. Foreign capoeiristas work hard to learn Portuguese to better understand and become part of the art. Renowned capoeira mestres often teach abroad and establish their own schools. Capoeira presentations, normally theatrical, acrobatic and with little martiality, are common sights around the world.

The martial art aspect is still present and still disguised, leading many non-practitioners to ignore its presence. Trickery is ever present and expert capoeiristas can even disguise an attack as a friendly gesture.

Symbol of the Brazilian culture, symbol of the ethnic amalgam that characterizes Brazil, symbol of resistance to the oppression, capoeira definitely changed its image and became a source of pride to Brazilian people. Capoeira is officially considered intangible cultural heritage of Brazil.

Playing capoeira is both a game and a method of practicing the application of capoeira movements in simulated combat. It can be played anywhere, but it’s usually done in a roda. During the game most capoeira moves are used, but capoeiristas usually avoid using punches or elbow strikes unless it’s a very aggressive game.

The game usually does not focus on knocking down or destroying the opponent, rather it emphasizes skill. Capoeiristas often prefer to rely on a takedown like a rasteira, then allowing the opponent to recover and get back into the game. It is also very common to slow down a kick inches before hitting the target, so a capoeirista can enforce superiority without the need of injuring the opponent. If an opponent clearly cannot dodge an attack, there is no reason to complete it. However, between two high-skilled capoeiristas, the game can get much more aggressive and dangerous. Capoeiristas tend to avoid showing this kind of game in presentations or to the general public.